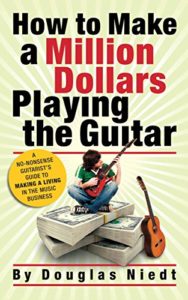 Book – How to Make a Million Dollars Playing the Guitar

`How to Make a Million Dollars Playing the Guitar`  is, according to the publisher, a no-nonsense guitarist’s guide to making a living in the music business written by a guitarist who’s been there and done it himself.

They claim, you can be quite successful as a guitar player or musician if you understand the insider secrets on how the music industry works, how to attract raving fans and how to structure and build your business properly from the ground up.

What I liked about the book?

The book is highly motivational. It is like a self-help guide made just for guitarists. Throughout the book, you will feel the writer`s passion for guitar playing and music in general, work its wonders on you.

He claims it will be hard, very hard, to make a million being a guitarist, but he makes you want to go on that journey.

The book also has a few useful lists to consider. These include 19 things to get started on to `make it` in the industry.  Some of these things are not too much fun (such as copyright law and performance royalties) and others are (such as the recording process and video production).

Is there an audio cd and is it any good?

No, and it is not needed.

Although highly motivational, the book lacks specific advice on what exactly you should do. The list of 19 things is one of the most specific parts of the book, but even then the author says you will have to research them.

After reading the book, I`m not really sure I learnt a lot. There is no specific plan to follow. Instead of spending the majority of time giving a `kick up the rear end` of deluded musicians or motivating those who need it, a plan of action would have been much more useful.

For instance, he could take you through the steps of building a website, portfolio of styles, (e.g. blues, country, jazz, rock, folk), how to meet big influencers (hang around after gigs) and other super important factors.

This is a highly motivating book but unless you really want to make it as a superstar guitarist, it probably isn`t for you.

If you do want to make it as a superstar guitarist, then you will probably get more from reading a business book (such as those written by Dan Kennedy) and applying the knowledge found there.

It is good for motivation and a reality check but not too much more.