A few months ago I created a survey over at my other site – Guitar Domination – asking everyone on my mailing list (over 8000 people) which things they would like to learn about. Most of the answers I received were what I expected; strumming, picking, chord changes, etc, but one very popular answer from a lot of you was that you wanted to learn and understand the fretboard even more.

This surprised me a little, but it was a nice surprise.

Learning and understanding the fretboard is a vital part of guitar playing. If you know where the notes are located all over the fretboard, you will have much more freedom on the instrument.

Here are a few of the benefits of learning the fretboard.

There are 132 note locations on a standard electric guitar (with 22 frets) as multiplying 22 frets by 6 strings equals 132.

In this mini-series, I’ll teach you how to break this up into much easier, and actually quite fun, ways using a variety of time-savers, patterns and tricks.

In this part of the series, we will learn 28 of these notes on the fretboard.

We would never want to learn them all in one go, even using my time savers, patterns and tricks, as it would be overloading the brain with far too much!

The above are just some of the simple reasons for learning the fretboard. In this lesson, I’m going to give you the best action plan I have created, and one I give to all my students or those who are starting to learn the fretboard.

Note: If you play an acoustic guitar you will find that you likely only have 20 frets and some of these higher ones won’t be accessible especially if you don’t have a ‘cutaway’ body.  If you are exclusively an acoustic player you probably won’t play too high up the neck but I still recommend learning all these tips and patterns as they will help you make more sense of music and the instrument as a whole.

The tips in this fretboard action plan are simple tips and don’t require a huge amount of practice, just regular repetition. You’ll be more confident remembering the notes on the guitar for the rest of your playing days using these tips.

Powerful Tips to keep in mind when learning the fretboard

Below are a few important things to remember and refer back to when learning the fretboard. You don’t need to fully understand the points mentioned here yet, but they help make everything in the fretboard action plan make more sense.

Step 1 – Starting off on the low E string…

The first thing I get every student to do is learn the location of the natural (A, B, C, D, E, F, G) notes on the low E string.

We won’t learn all these notes on this string when starting out. That is too complicated and too much to try to remember.

Instead, we will break this string up and use the ‘markers’ on various points on this string, learning these notes and then later filling in the blanks.

Take a look at the image below. 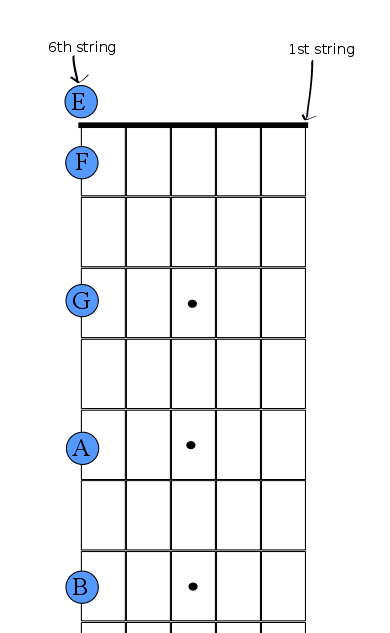 There are in fact 5 notes we start with. It doesn’t seem like a lot but these 5 notes are the foundation for learning the whole fretboard, so take your time ingraining exactly where they are located on the guitar.

The first note is the open ‘E’ string, which most people already know from tuning the guitar.

The next note we learn is the ‘F’ note, located on the 1st fret. When starting out learning the notes on the fretboard, most people actually don’t know that E and F are on frets next to each other.

I always explain to students that when moving up the fretboard, you need to use the alphabet to start with. You would be surprised at how many people say a random letter in answer to the question “what comes after ‘E’?” It is of course ‘F’.

This note is located on the first ‘dot’.

Use the dots as markers to help remember the location of this note, and the upcoming notes, as these markers are super useful. Always remember the dots are placed on the top of the fretboard too, not just on the front of it. This will stop you from leaning over to see where they are.

The alphabet then begins again (as there is no ‘H’ in the musical alphabet) with an ‘A’ on the 5th fret which is on the 2nd dot.

Therefore, to sum it up we have E, F, G, A, B. Learn and remember where these notes are to begin with.

Students find this helps them to remember these three notes when starting out.

Step 2 – Adding in more notes on the low E string

When you are comfortable with where those notes in step 1 are then we will add in a couple more notes on this string.

So far, we have learnt the location of 5 notes all on the low E string and now we will add in a couple more. 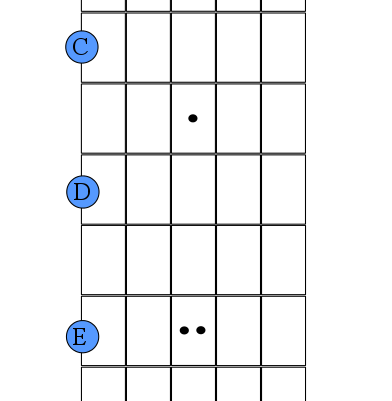 The 8th fret is where you will find the note of ‘C’.

The 10th fret is where the note of ‘D’ is located. Note, C and D are located on either side of the marker on the 9th fret. It helps to try to remember this. It would be ideal if all the natural notes fell on markers but unfortunately, it isn’t that simple!

Here are all the natural notes on the 6th string we have looked at – all together:

You might be thinking hang on, the note of ‘E’ is the open string, how can it be located at the 12th fret as well? I’ll explain why…

Step 3 – Why everything starts again at the 12th fret…

Well the answer, as you may or may not have heard before, is that at the 12th fret everything starts again. All the notes and all the sequences you will discover on the frets below the 12th all start and repeat again.

Take a look at the image below. The notes in blue are what we have covered so far and the notes in red are where these same notes repeat, but this time at a higher pitch (the same note played at a different pitch is called an ‘octave’).

You will notice the markers on the guitar located on frets 3, 5, 7, and 9, all repeat after the double dot.

In fact, I get students to imagine that the double dot at the 12th fret is the start of the fretboard and everything from this point onwards is the same.

I also get them to imagine sawing their guitar in half at the 12th fret and one half is thrown away. This helps strengthen the image that the fretboard is the same on either side of the 12th fret.

Now, learning this bit of knowledge you have has just halved the difficulty of learning the fretboard so make sure you fully understand it.

This means the fretboard of a 22 fret guitar has gone from 132 possible notes to just 66. A little less scary now I hope.

Most guitarists tend to need and use the notes below the 12th fret a fair bit more than the ones past the 12th fret (as this is where they spend more of their playing time) so it is wise to be 100% confident with the notes you have learnt today from the open string up to the 12th fret.

That however does not mean you shouldn’t aim to remember all the notes past the 12th fret. After all, the same patterns simply repeat!

Whenever you learn a new note on either of these strings just remember that they are the same on each string and transfer that knowledge to either string.

There you have it. Apply all the above to both the low E string and the high E string, and then remember it repeats from the 12th fret, and you will see you have now learned a pretty solid chunk of the fretboard.

The image below covers what we have learned in this lesson all in one image.

What you have done in this lesson is learn the location of all the natural notes on the low E and the high E strings.

Wait for part 2 where we will use some super cool things to learn all the rest of the notes on the fretboard.

I hope this lesson helps you realise that the whole fretboard is not a crazy or scary place, but a place where there are plenty of simple patterns that when applied help simplify and decipher the apparent randomness of it all.

In the next part of our fretboard action plan, we will fill in the blanks in between the natural notes, talk more about sharps, their counterparts ‘flats’, and learn some other super simple rules that make the fretboard much easier to understand and use!

Great! Now I know what the dots are for on the side of my fret board. Will take it step by step. E (open string) F (1st fret) – GAB (first 3 dots). I will pick at random any point along the e string on the fret board and then try and remember the note.Starting with these 5 and move on when I know them.

Oh wow, just discovered this page and it is so helpful. I have been exposed to all of this but you put it all in such an easy to understand manner and this is a great study guide!

Cool, glad you enjoyed it, Nancy! Pleased you found this tricky concept useful. 🙂

This is an excellent excellent introduction. My ability to memorize is weak but referencing the fretboard markers is a big help.

Glad to hear it, keep revisiting it in small doses, and get a family member to test you – that is fun and a real test. 🙂