How to Practice Your Guitar Scales Using ‘The Big Cycle’

If you have ever learnt a scale and found yourself limited by one ‘box’ position for the scale or found the effort of learning lots of shapes too much work for too little reward, then this lesson is for you.

In this In Focus lesson, I will teach you one of my more advanced (but not difficult) ways of really mastering any scale you know and making them super playable up and down the fretboard without a huge amount of effort.

Doing so will give your scales a bigger range and a huge amount of different ways of playing the notes without bogging yourself down with the graft of lots of shapes to remember.

It is simply a way of playing a scale of your choosing in the:

If that makes no sense, don’t worry it will shortly.

In this lesson, we are using the minor pentatonic scale as our example as it is probably the most popular of all scales and as it contains fewer notes than most other scales it is a great one to begin with.

The first step for the ‘Big Cycle’ is to learn the scale in the open position.

Here is how to play the minor pentatonic in the open position. The root notes are highlighted in blue.

Up the high E string

Now we will learn how to play the same notes but this time for one octave up the high E string.

Learning scales up and down one string is so important as it helps you see as well as hear the intervals (spacing) of the scales almost like a pianist would. 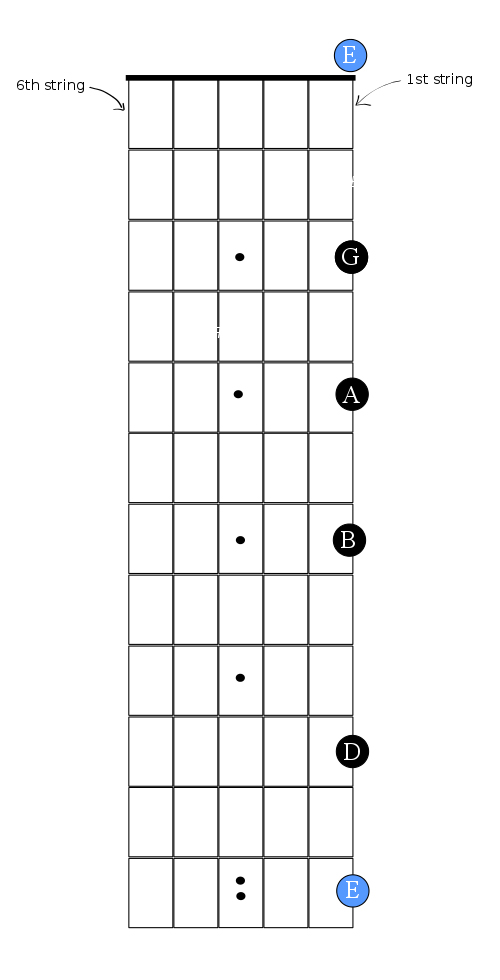 You may struggle to play the scale at the 12th fret if you have an acoustic guitar and it doesn’t have a cutaway.

You can still play the scale up here without a cutaway but the higher notes won’t be as easily accessible so you may have to adjust your hand position.

Down the low E string

The notes here are exactly the same as on the high E string but are two octaves lower in pitch.

The beauty of playing the scale up and down the high E string and the low E string is that you only have to learn where the notes are for one string and then just repeat them for the other, but you get two totally different pitches to use in your playing. 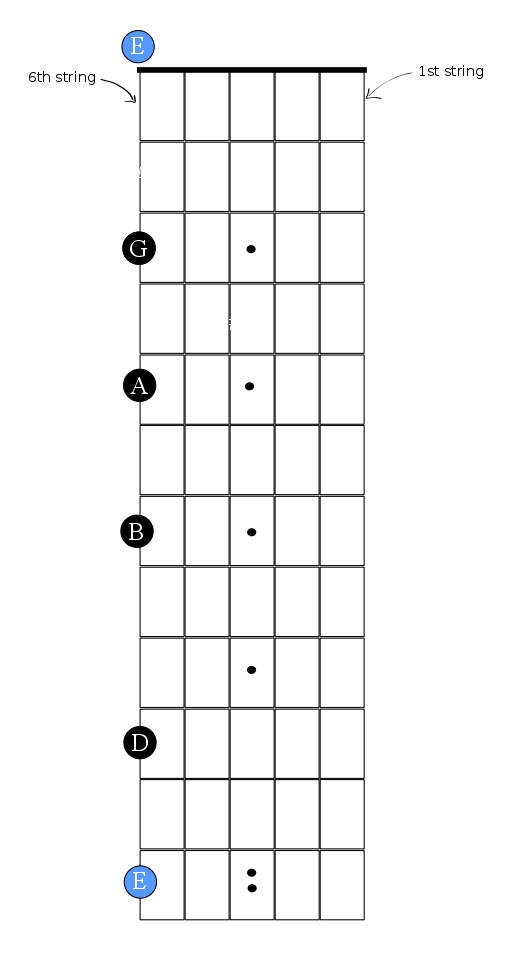 Now, we will put all of the above together.

This is what the ‘Big cycle’ looks like in full.

The aim is to play all of those notes in the order shown in the previous steps, without pausing.

Play them in the open position, up the high E string, at the 12th fret, down the low E string.

Ensure you play them in a big loop or ‘cycle’ and then repeat the cycle as many times as you like or need to, to make it comfortable for you to play.

Below is the TAB and notation on a useful way to play this. Take your time and enjoy! 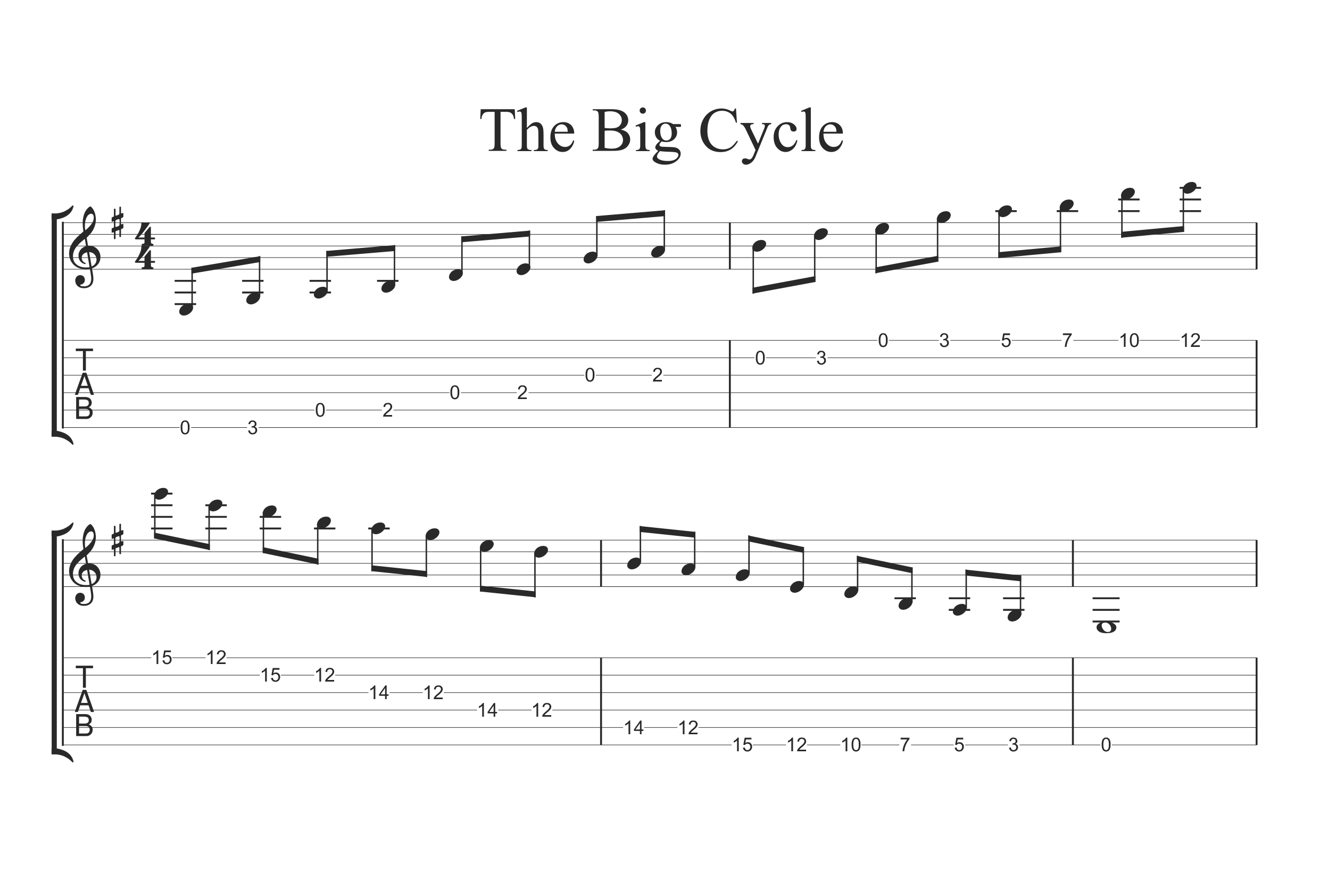 Now, let’s talk about why the BIG Cycle is so useful for your playing…

Reason #1 – A bigger range in pitch

When most people play a scale they often just learn the simple box position which is the first example.

This is a great place to start but doesn’t give you much range as the lowest note is the Low E string and the highest note is the open high E string. That is a range of two octaves.

When playing some lead or any sort of melody, two octaves is a good range but by restricting yourself to this you are leaving a higher range of notes on the table so to speak.

When you learn the big cycle the highest note is another octave higher giving you far more range.

Therefore, when playing a solo, you have the low bassy notes available to you as well as the soaring high pitch of the high E string played at the 15th fret as your highest note.

When playing box shapes, after a while you will find that some things just start to sound a bit samey, no matter how different you try to use the shape.

Playing a scale up and down one string is such a useful way to break out of playing familiar or even cliche phrases. A lot of pro’s do this but amateurs don’t.

Playing up and down one string allows you to slide, hammer-on or pull-off each note in the scale which isn’t possible in ‘box’ positions.

Also, you will be able to use the open string as a drone note in between playing scale tones.

In other words, you could fret one of the notes, hit an open string, fret another, then hit another open string, etc.

This sounds cool especially when played fast and this is not possible at all in the box position.

The ‘Big Cycle’ has the best of both worlds!

To put it simply, there are benefits to being able to play in the box position AND up and down one string when using scales.

The ‘Big cycle’ utilises and puts the two together in one seamless loop thereby freeing you up to play all over the fretboard without having to painstakingly learn all the box positions.

You can fill in the blanks by learning all 5 box position shapes but its far more work for not much more reward and there are better things to spend your time on.

Why the key of E minor?

One thing to note is that the above is for the key of E minor.

The reason why we have it in E minor is that a lot of guitar music is in the key of E minor due to the fact the lowest note on a standard tuned guitar is an E.

If you want to play it in different keys you can move the whole thing up to change the key.

For example, you can move the scale up 1 fret for F minor, 2 frets for F#minor, etc.

Moving forward with the ‘Big Cycle’

When you can play the big cycle really well, play it in reverse.

This will help in your real-world playing as you will be comfortable moving up and down the scale in a variety of ways.

Get so good at it you can play every note in the cycle without any sort of pause.

For extra bonus points and benefit, put on a slow drum beat or metronome click at 60bpm beat and play each note in the cycle as shown.

Well, there you have it…

A lesson on what I believe is the most effective way to learn scales using the Big Cycle.

It gives you the most range, possibilities and fretboard fluency, all without having to learn and remember a huge amount.

In a future lesson, I’ll show some examples of how the ‘Big Cycle’ can be pretty awesome used in a practical setting.

For now, learn the above and enjoy!

This is interesting. I am little confused on how to play it in order. A video would be helpful.

I tend to go through the images in order so you play it going up the first box position, then up the high E string, then down the second box position and finally down the low E string. If that doesn’t make sense, I will do a TAB for it, and will film a video on this too. 🙂

ok i think i get it so going down the low e …. G, E D, etc…. you are going clockwise and then just continuing the loop.

Yeah, I never really realised how this was not clear before, back when I did the lesson. Hopefully the new TAB shows it more clearly and how you can play it as an endless loop. 🙂

I thought I would use this as an exercise for my pinkie as per this months 2 min challange. But I am now confused about the e minor pentatonic scale. Across the top and bottom of the neck you show no C but going up and down you include C ??

Good shout, Martin. Thanks for the heads up. The C note should NOT be there – not sure how it snuck into the image. I will get it changed – for now, ignore the C. Thanks 🙂

I thought I would try a different scale using this method and found it difficult because the pentatonic box didn’t work out so well. I tried D minor pentatonic which is ( I think) D F G A C D. In open position this give on lowE fret 1 then fret 3 then open A and fret 3 on A then open D and fret 3 on D then open G followed by fret2 followed by B string fret 1 followed by fret3 and on high E 1sr fret and3 rd fret. Then up the high E string -F G… Read more »

What you describe sounds about right but not 100% sure I follow. I have just created the TAB for E minor pentatonic. Get it HERE. Hope that makes more sense (there are some blank bars so you can add your own in different keys if you like – which I can check).

Thanks Dan, I will try thst.

Cool, hope you enjoy and find it useful 🙂

The tab is very helpful. thx!

Cool, glad to hear it. I have just updated the images too.

I have gotten so much better at this. One of my favorite things to practice right now🤗

Ace, super pleased to hear it! What is it you love about this one (just curious – I love it too!) 🙂

Well, now that I can play it smoothly and have memorized the notes, I feel like I am really playing guitar. I’ve gotten pretty good at strumming and chord changes and now I am doing more scales on my electric and I am starting to understand how scales work up and down the fret board. This lesson at first was confusing to me and now it is just super fun.

Cool, glad you enjoyed it. It is a good fun lesson and helps unlock the fretboard for sure!