What is it that I am talking about?

It is the ability to play strumming fills.

What is a strumming fill?

Well, you know how your favourite drummer spices up his beats and plays something with more energy towards the end of a section to add some excitement and tension?

Well, it is the same principle but applied to the guitar. Most pro`s use strumming fills a lot. Amateurs or inexperienced guitarists either don`t know how to or haven`t got the confidence or skill to do so.

Today you will learn how to play strumming fills using my logical process.

When and how do we add strumming fills?

Really, you can use them wherever you like, but a good time to use them is where a drummer would.

If you are playing with a drummer (either a real one, or a recorded one), then you can listen to where they throw in the fills and try to add your fills with them.

If you are not using a drummer, then a good rule of thumb is to use a fill in the last bar of a section.

For example if your verse (as shown by `V`) is: 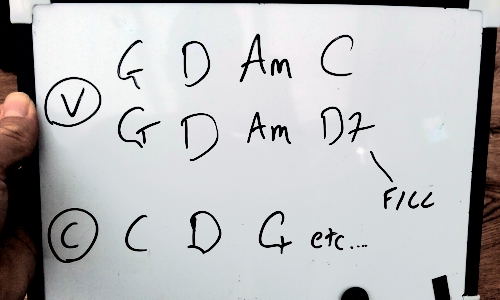 You would be best off playing the fill during the very last bar of this section which is a D7 chord. The song is building up to something here and that is the point of a strumming fill. It will highlight this build-up of tension before the next section comes around.

The song moves into the chorus (as shown by `C`) section after this last D7 chord but of course it could just loop back around to another verse.

Either way a strumming fill would still sound cool as it adds that bit of tension at the end of the section regardless of where the song goes to next.

Each of the following 5 strumming fills has two examples.

The first version shows you the fill in isolation. Just one bar of the fill fast and slow so you can learn it.

The second example teaches you how to play the fill within a chord progression. The chord progression is actually the one shown in the image above (minus the top line). This is so you can hear the fill in a real world scenario.

For every chord except the D7 (which is where we will play the fill) we will strum the chord in a conventional manner using a strum pattern nearly everybody knows.

Here is how the strum pattern looks and sounds on a G Major chord if you need a recap.

If you have never learnt this strum pattern, have a few runs through and learn it before tackling the rest of this month`s In-Focus lesson.

Both the fill itself and the real world examples are played at two speeds. These are the:

Try to get solid timing with the slower speed version before aiming to play along with the full speed version. Both versions are exactly the same. The only difference is the tempo.

All 5 get progressively harder so start with number 1 and then work your way down to number 5.

Above each tab there is a strumming guide to help assist you with your up and down strums. They are shown as the following…

Each fill is shown on a different chord to keep it fun and interesting.

This first strumming fill is a good old classic and builds up the tension using straight eighth notes. All eight strums are played as downstrums.

As you can see in the tab below each strum incorporates more of the strings. Don`t try to be too precise with exactly which strings you strum. Instead, focus on the idea that each strum gets a little louder and fuller.

If you only learn one strumming fill this is the one to learn as it is so flexible and sounds great in most situations. 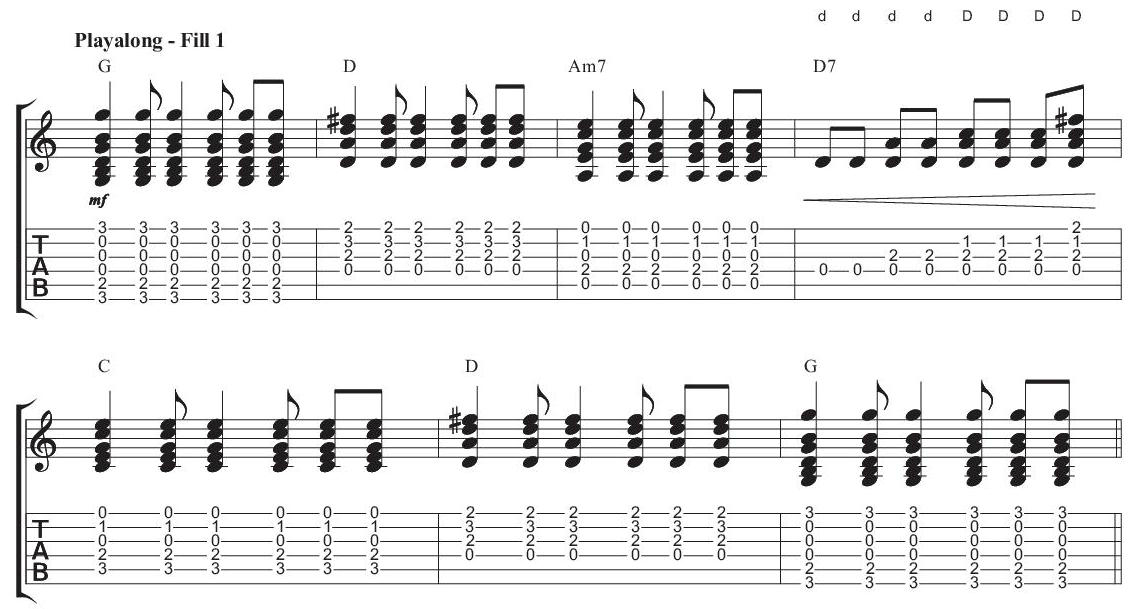 This strum is a bit more of a rocking strum fill and is another really useful strum fill that now incorporates 16th notes. The first four strums are very similar to in fill 1. We are play progressively louder and fuller downstrums.

After this though, we use muted strums with a faster down and up motion to create the 16th notes.

To mute the string, place your fretting hand across all six strings at around the 2nd fret. Then you can strum the muted strings as shown as `x` in the tab.

Now we incorporate a new technique. This fill uses `staccato` or in plain English a `choppy` sound.

It uses all downstrums, but notice there are short breaks in between. To create this choppy break, strum and then place your strumming hand on the strings to stop the sound completely. Then strum and repeat.

The last strum is simply a ring out.

Playing these choppy fills requires practice at a slow speed so take your time with this one.

It`s a tricky little technique but adds lots of cool tension as a piece of music builds to something. You`ll hear this type of very stylish fill a lot in music. 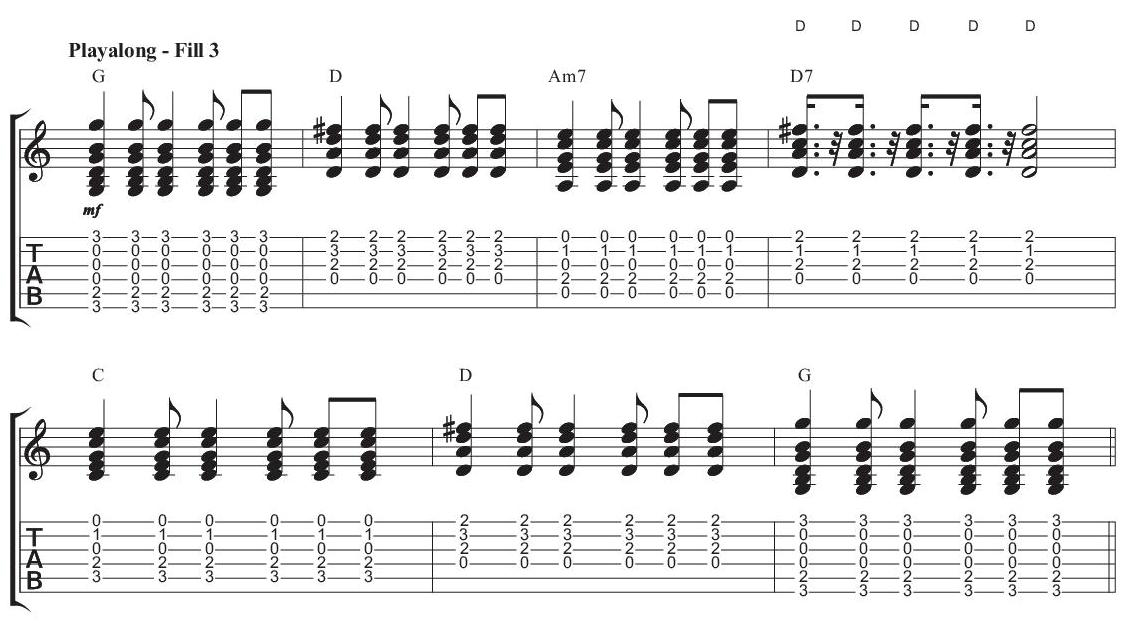 Here we have a dramatic sounding fill due to the faster 16th note strums and then the ring out before we ramp up the last four strums.

This one isn`t technically demanding to play but requires you to be tight with your timing or it will sound off.

Notice, it only uses down and upstrums and no mutes or staccato. The first four strums are quieter than the last four. 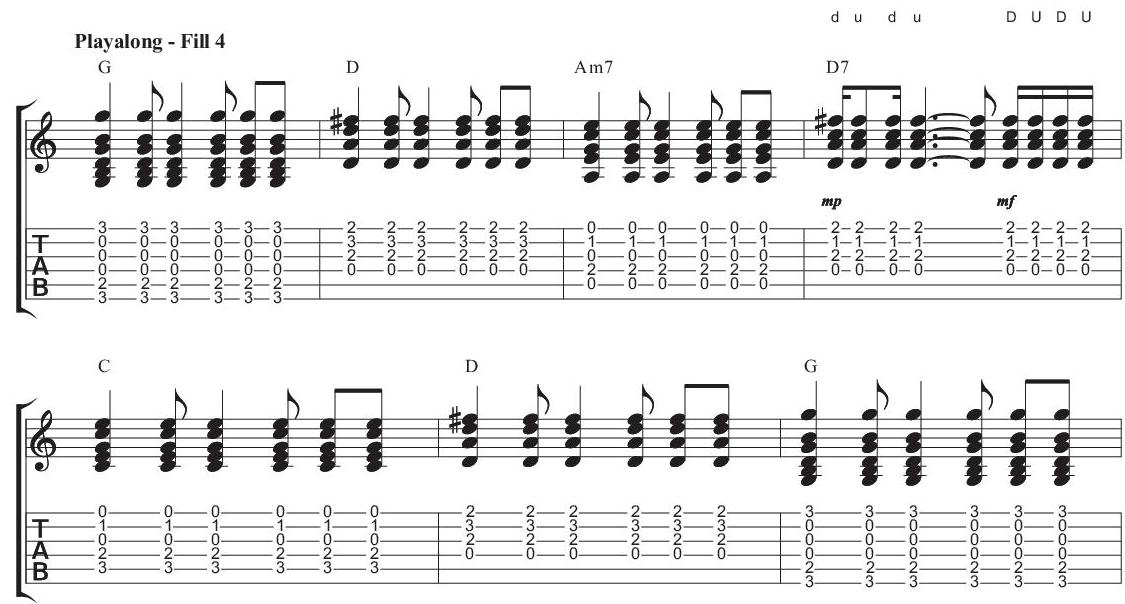 This is the trickiest fill for most guitarists and is more of an advanced fill. This fill combines all the ideas from the previous fills to create something really cool.

You can break this fill up into three parts when learning it.

Take your time with this strum fill and learn it slowly. Once you are happy with it, add it to your arsenal of strumming fills. 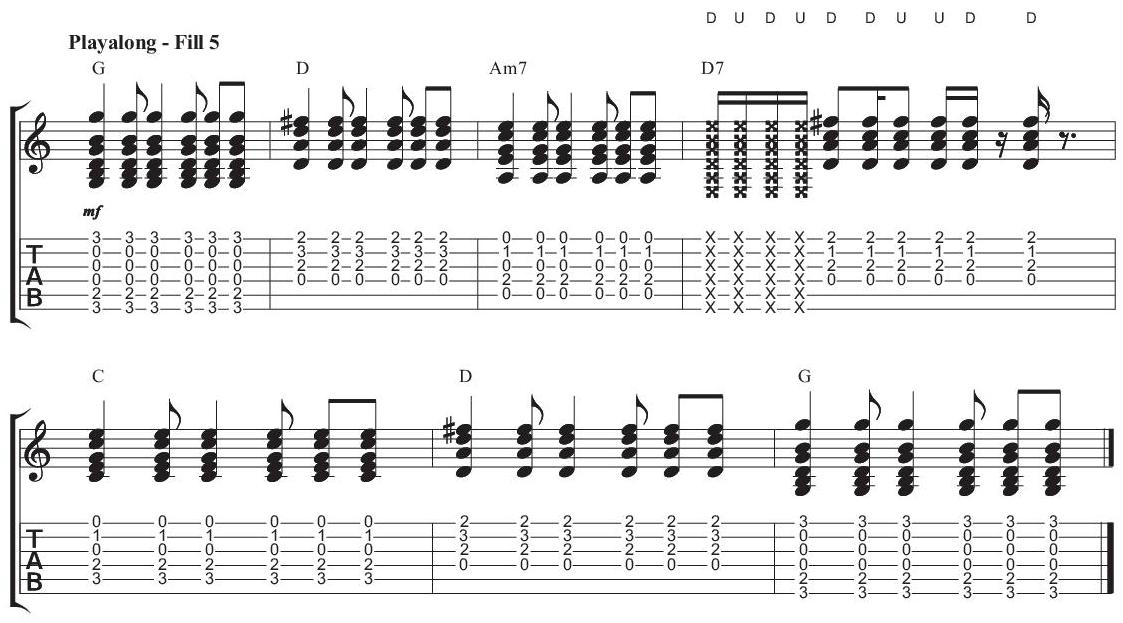 If you have learnt all the above fills and want extra practice, you can put on a backing track (there are lots on YouTube) and try to replicate the fills the drummer plays. Listen closely to where the fills are (usually at the end of every 4th or 8th bar) and try to follow the drummer’s rhythm during the fill.

Don`t try to follow it note for note. That isn`t what the pros do. As longs as you have a close vibe to what the drummer is doing that will usually sound awesome.

All in all, strumming fills are a very cool way to bring to life a piece of music. Most guitarists are taught to use one strum pattern throughout a whole song. Although this is okay for beginners and when learning songs, you will really want to add a strumming fill here and there to bring a song to life.

Just one strumming fill added to a song will make the song so much more fun to play and listen to.

Also, feel free to create your own strumming fills. The ones I have shown you here are some of my favourites that I have either created or adapted. Feel free to use your own or adapt mine!